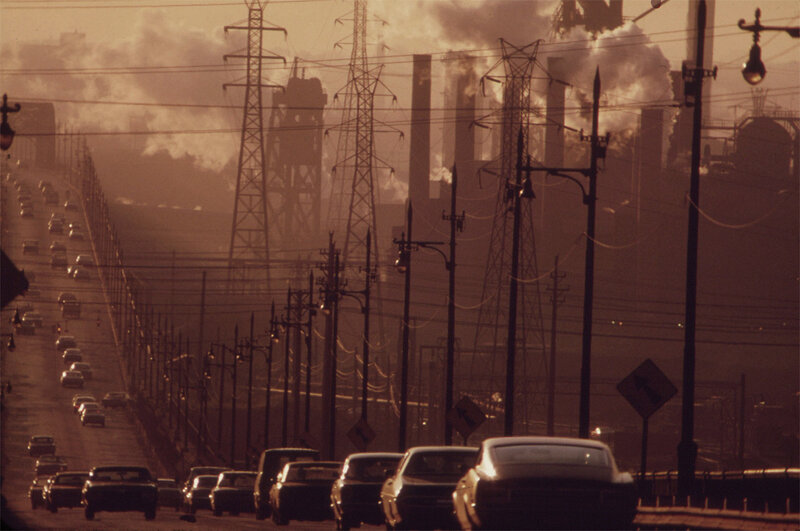 p_d_m в Images of America in Crisis in the 1970s
ИСТОЧНИК:

1. Water cooling towers of the John Amos Power Plant loom over a home located across the Kanawha River, near Poca, West Virginia, in August of 1973. (Harry Schaefer/NARA)

2. One of four bicyclists holds her ears against the roar of the jet taking off from National Airport in Washington, D.C., in May of 1973. (John Neubauer/NARA)

4. A man rides in a graffiti-covered subway car in New York City in May of 1973. (Erik Calonius/NARA)

5. Construction on Lower Manhattan's West Side, just north of the World Trade Center, May 1973. (Wil Blanche/NARA)

6. Off-shore oil wells in Galveston Bay, off the Texas shore, in June of 1972. (Blair Pittman/NARA)

7. Looking east along Alaska's Glen Highway, toward Mount Drum (Elevation 12,002 Feet) at the intersection of the highway and the under-construction Trans-Alaska Pipeline in August 1974. The 48-inch diameter pipeline will cross the roadway between the two vehicles. The exact point is marked by a pair of wooden stakes along the right shoulder at Mile 673. (Dennis Cowals/NARA)

8. An exhibit at the first symposium on low-pollution power systems development, held at the Marriott Motor Inn, Ann Arbor, Michigan, in October of 1973. Vehicles and hardware were assembled at the EPA Ann Arbor Laboratory. Photo shows participants looking over the ESB "Sundancer," an Experimental Electric Car. (Frank Lodge/NARA)

9. Signs crowd the roadway in this Las Vegas street scene, shot in May of 1972. (Charles O'Rear/NARA)

10. A train on the Southern Pacific Railroad passes a five-acre pond, which was used as a dump site by area commercial firms, near Ogden, Utah, in April of 1974. The acid water, oil, acid clay sludge, dead animals, junked cars and other dump debris were cleaned up by several governmental groups under the supervision of the EPA. Some 1,200,000 gallons of liquid were pumped from the site, neutralized and taken to a disposal site. (Bruce McAllister/NARA)

12. One of several highrise apartments whose construction was stopped by city ordinance to preserve Breezy Point Peninsula in Queens, New York, for public recreational use. Photo taken in May of 1973. (Arthur Tress/NARA)

13. A crowded Hollywood freeway, seen in California in May of 1972. (Gene Daniels/NARA)

14. A "closed" sign appears in front of this Portland, Oregon, gas station in June 1973, due to a gasoline shortage. (David Falconer/NARA)

15. The Peabody Coal Company in the Black Mesa area of Northeastern Arizona, in May of 1972. (Lyntha Scott Eiler/NARA)

19. The LIMTV (linear induction motor test vehicle) is tested at the Department of Transportation's high speed ground test center near Pueblo, Colorado, in March of 1973. The experimental vehicle is designed to operate at speeds up to 250 miles per hour, using electro-magnetic forces for noiseless propulsion. (Bruce McAllister/NARA)

20. A young man and woman smoke pot during an outing in Cedar Woods, near Leakey, Texas, in May of 1973. (Photo taken with permission) (Marc St. Gil/NARA)

21. Cars were jammed even more than usual into every spare space at a downtown commercial parking lot during a bus strike in Washington, D.C., in May 1974. Some 250,000 people were forced to find alternate forms of transportation. Monumental traffic jams resulted as drivers learned there were more cars than legal places to park. (Jim Pickerell/NARA)

23. A sidewalk in the Bronx becomes a playground for these youngsters, in April of 1973. (Dan McCoy/NARA).

24. An abandoned "Giant Slide" at Coney Island marks the decline of the area's recreational use in May of 1973. (Arthur Tress/NARA)

27. An aerial view of old cars secured along a bank of the Cuyahoga River to prevent erosion at Jaite North of Peninsula, Ohio, near Cleveland, seen in September of 1975. The river passes through private property at this point. The river and valley are part of the newly created Cuyahoga Valley National Recreation Area, a 20-mile stretch of largely undeveloped land between the metropolitan districts of Cleveland and Akron. (Frank J. Aleksandrowicz/NARA)

28. One of the daughters of Jerry Rainey, a miner who was out on strike against the Brookside Mining Company in Brookside, Kentucky, for several months during 1974. She stands on the back porch of the house Rainey rents from the company. Notice the outhouses in the background. The family was threatened by eviction during the lengthy and sometimes violent strike despite a state law which outlaws such practices. (Jack Corn/NARA)